LEGO’s Strategic Blunder: How they Failed to Own Adjacent Markets to Execute their Strategy

Over the past few weeks, the success of “The LEGO Movie” has put LEGO back into our conversations and consciousness. Critics are raving and business people are marveling at the potential impact. For example, there are many new characters introduced in the movie that will drive the sales of LEGO toy brick packages.

This resurgence of LEGO is a great business acumen example. There are many business acumen skills that are often overlooked or unpracticed. One such is the ability to execute your strategy by expanding into adjacent markets. While on one hand, this can be futile as the market can be relatively unpredictable and therefore your product may not fit well at certain times, on the other hand, it is pivotal to look at the various trends and take advantage. It looks like LEGO is a company that missed a huge opportunity expanding into adjacent markets and there are some significant lessons to be learned from a business acumen perspective.

Within the past decade, LEGO has revitalized its place in the children’s toy category with its partnerships with various media corporations, such as Lucasfilm and Warner Brothers. LEGO now has the ability to use extremely popular copyrighted material, like Star Wars, and other LEGO incorporated themes in its brick sets, TV shows, a feature length film, and video games. Although it is clearly cashing in (through licensing) on the growing video game market, the one thing it may be forgetting is its original Customer Intimate value proposition: providing simple plastic building blocks that users can play with in infinite ways. This basic tenant of the company’s value proposition seems to be the only aspect of the business that is not being utilized in adjacent markets. Instead, the Swedish video game Minecraft has claimed this territory.

In Minecraft, players can literally build whatever they want out of pixel blocks. LEGO could have started investing in their own version of this approach as soon as they started making video games. What better way to be customer intimate than to adapt a popular toy into the growing segment of video games so that ultimately, more people can enjoy the product? However, they missed this opportunity, and Minecraft has sold 35 million copies of their game to date.

So what is the business acumen lesson in all of this? Using the Spider Chart tool, we can see where LEGO missed its opportunity in this market. 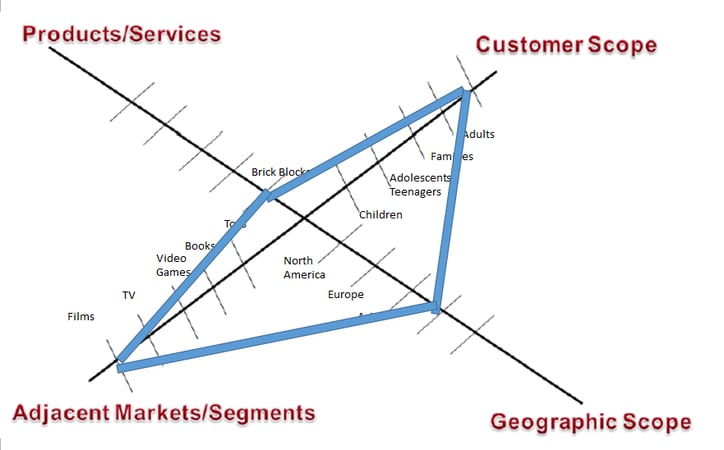 Its standard, reliable, and overall most successful product has always been the toy brick sets, so a strategic move would have been to channel this unique and buildable product into a video game, as that is where so much profit comes from today in the toy and game industry. While “The LEGO Movie” has been domestically and internationally successful, it is clear that LEGO still missed a huge opportunity when it did not create a “build-your-own-world” video game.

The same could be said for books, TV shows, and other toys that leverage such a strong brand.

So what are the take-always? Think about your company and your brands; are you missing opportunities to expand into adjacent markets? Have you conducted a Spider Analysis? SWOT Analysis? Product Portfolio Analysis?

And most important…does your organization have the skills needed to think this way?

Nathalie Rosenthal is a Project Manager and is responsible for business simulation design and execution.