Over the past few weeks, I have had the pleasure of facilitating several Business Acumen learning 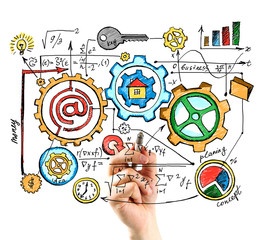 programs and two client's yearly executive business level strategy planning meetings. As I reflect back on the engagements, several themes emerged that I thought were worthwhile to discuss in a blog.
Leaders take their roles seriously and strategy execution is serious business; getting it right is critical to success. So when emotions are high and the risk is great, so is the potential for conflict.

In one business simulation engagement that I conducted last week everyone was very happy and friendly as they talked about their desires, goals and objectives for their simulated companies. When they got their results back and realized that they had to modify their strategy, conflict soon crept into the room. The same thing happened in the real-world planning session as the VP of Sales and the VP of Operations had a conflict-filled dialogue around forecasting and the need / issues over carrying extra inventory.

In both cases, the conflict was strong and ripe for diagnoses and resolution.

To help the both groups, I recommended that they take a look at some of the work byDr. Jay Rothman.  Dr. Rothman's ROI model of diagnosing conflict and his ARIA Model for solving it are fantastic and practical tools that still work today. I worked with Jay many years ago and out of all the models, frameworks, and tools that I have ever seen, his models are some of the best in the world.

For both teams that I was working with, I explained to them the framework and suggested that they practice them and then buy Dr. Rothman's book. In the ROI model R = Resources, O= Objectives, I= Identity, conflict is typically caused by one of these three elements. In the case of the business simulation team, they desperately wanted to perform well and learn as much about Business Acumen as possible and the conflict was really related to their identities as high potential leaders. In the case of the real-world planning, the VP of Sales is trying to drive revenues and the VP of Operations is trying to drive asset utilization; a classic case of different objectives causing the conflict.

In order to help ease the conflict, I again suggested that they pursue Dr. Rothman's work. We introduced the model:

What was most interesting about the work we did with the simulation team was that even though they had a rough time wiht it from a strategic, financial, and leadership perspective, after they started to diagnose and work on their conflict they went from near bankruptcy and last place to second place overall (out of 5) and had a very strong business moving forward.